Dauphin Island is for the Dogs 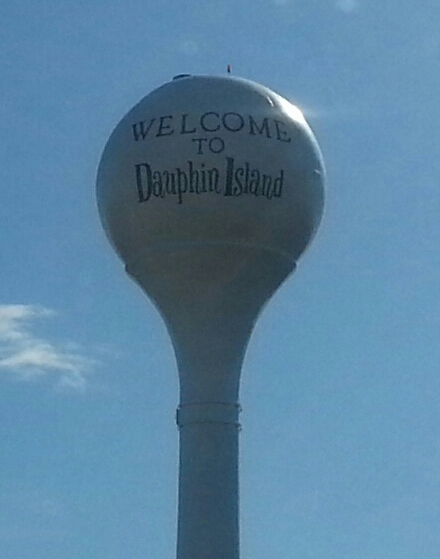 Our most recent destination was yet another remote beach location off the gulf coast of Alabama, Dauphin Island. This was a small somewhat run down island which was obviously once a booming vacation destination but now, at least in January, is primarily a place for oil workers and old folks that want to spend their golden years and modest retirement savings fishing and worshiping. The entrance to the island was spectacular and intimidating when pulling the trailer. 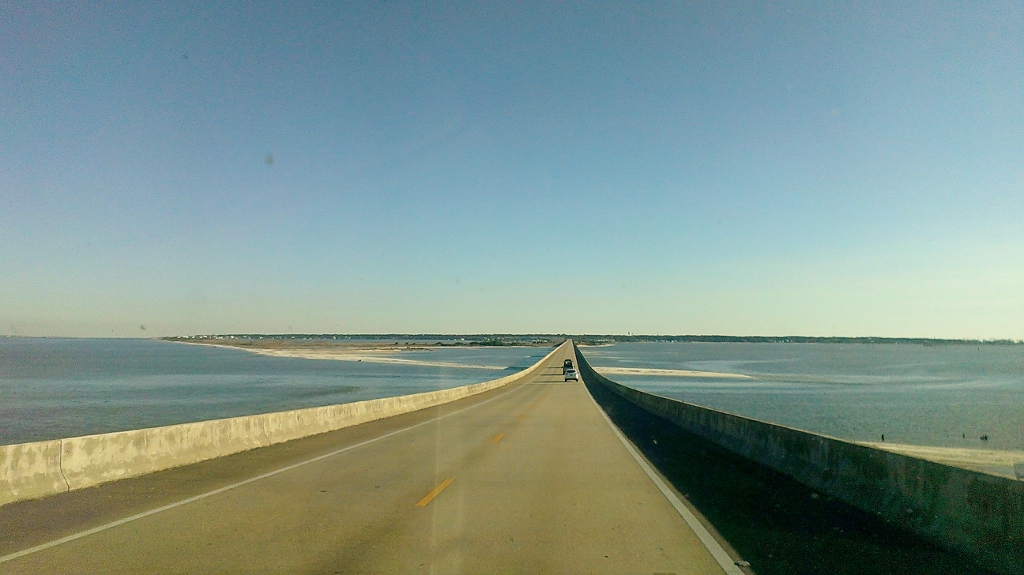 After checking in at the Dauphin Island Park Camping Area, and before we even got set up we were greeted by a friendly although quite a bit our senior fellow snowbirder who was intrigued by our Colorado license plates. After explaining how and why we were here, we were informed of the RV park bingo schedule, the locations of the fish cleaning station, the general store and each Church broken down by denomination. What else could we need to know?

No golf courses, hipster bars or $13 vegan sandwiches here. Just a somewhat run down camping area, a bunch of dilapidated, hurricane whipped houses and a dog-pee drenched beach with endless views of off shore oil and gas rigs. Or as Hank and Rufus like to call it “heaven on earth”! 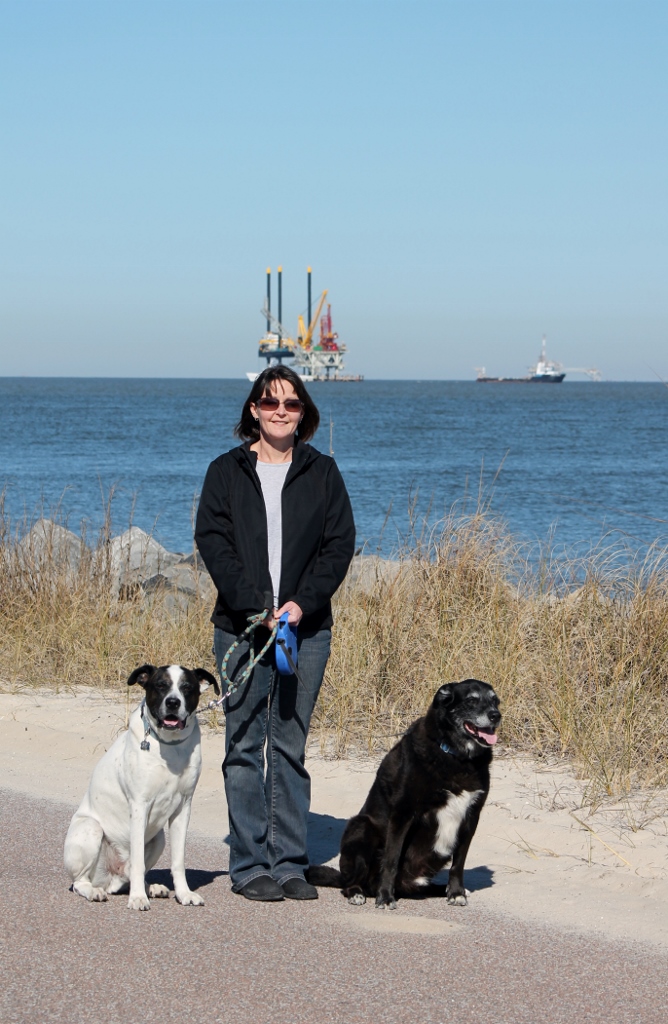 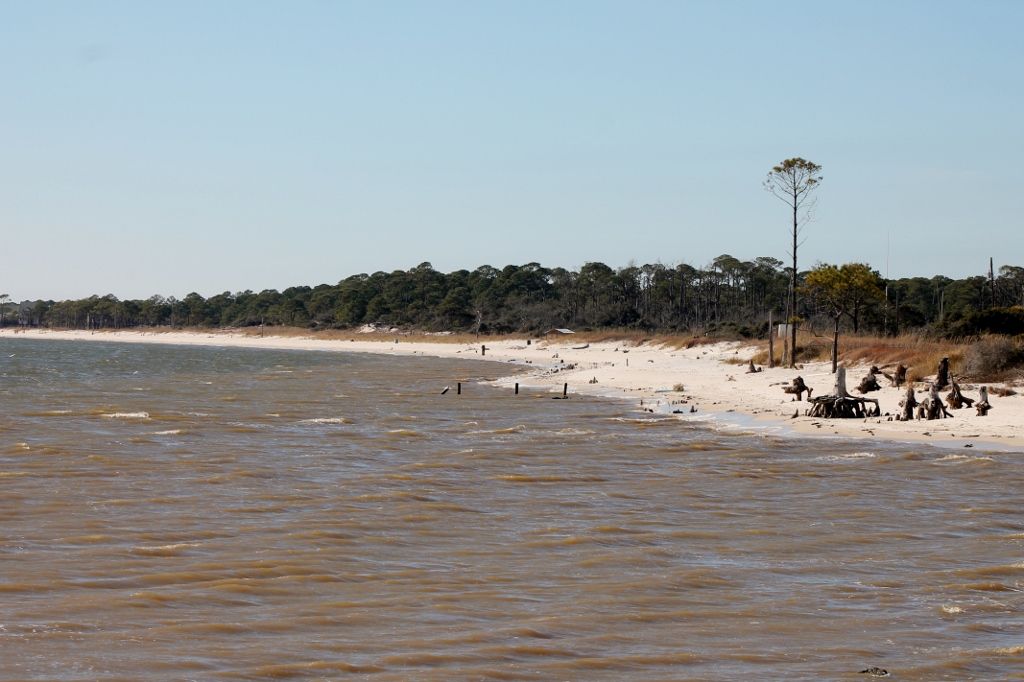 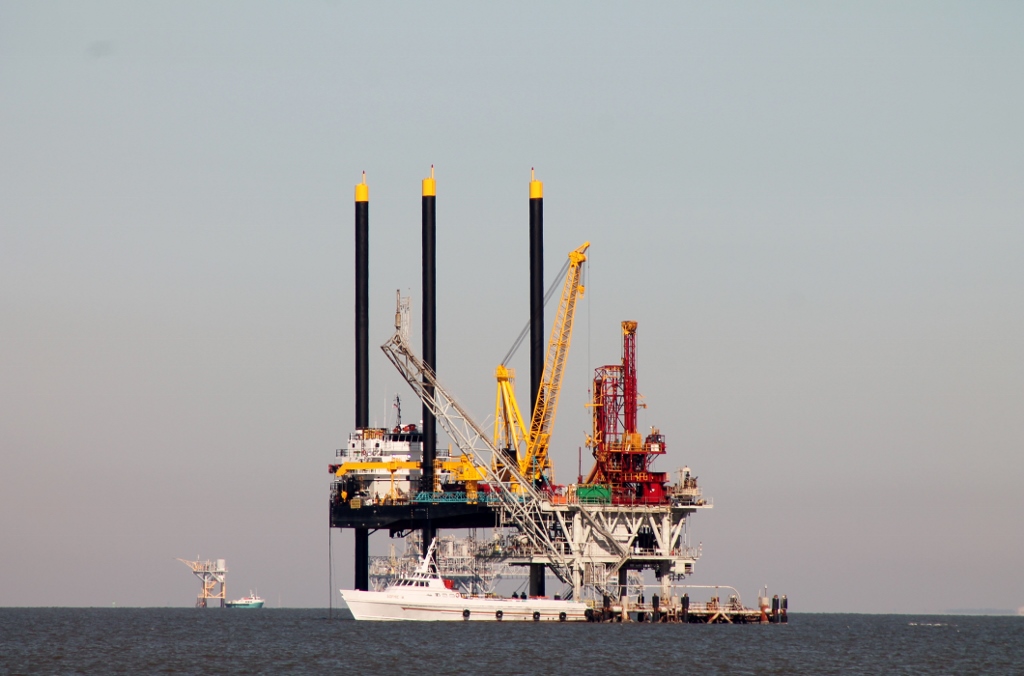 Yes, once again we found ourselves on a remote island miles from a city. To be honest, after months of island hopping, the excitement of an empty beach in cool weather has somewhat dulled for us. After a week in the exciting vacation town of Sea Side/Grayton Beach and the impressive Florida State Park network, we were probably a little let down by this location and what little there was to do. I can’t say that we didn’t see this coming. We had done plenty of research and we knew exactly where we were going and what it had to offer and didn’t. 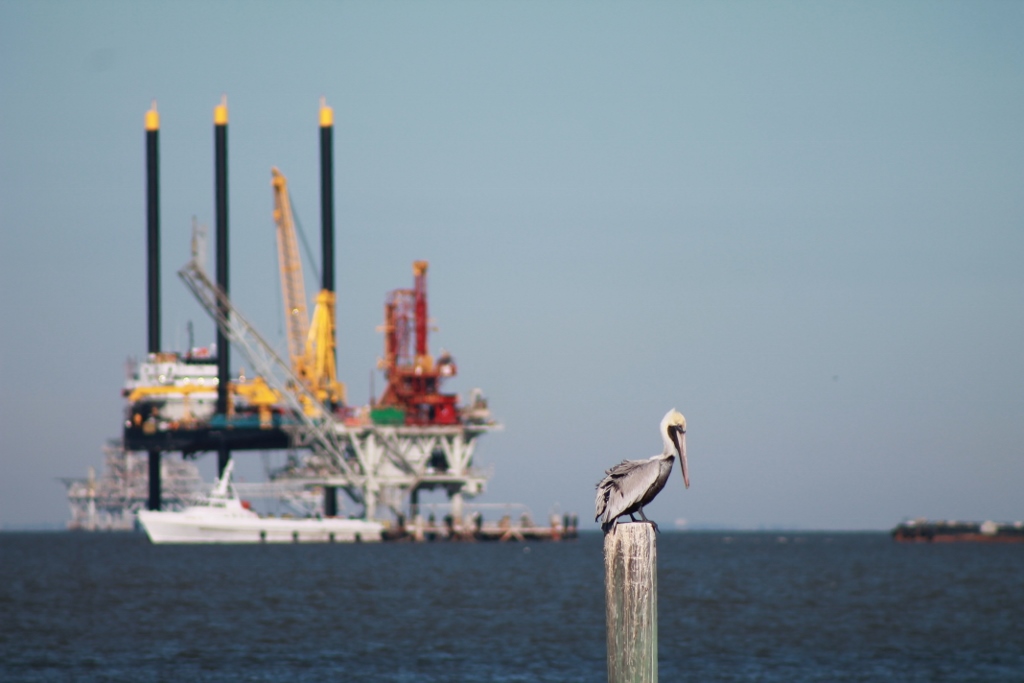 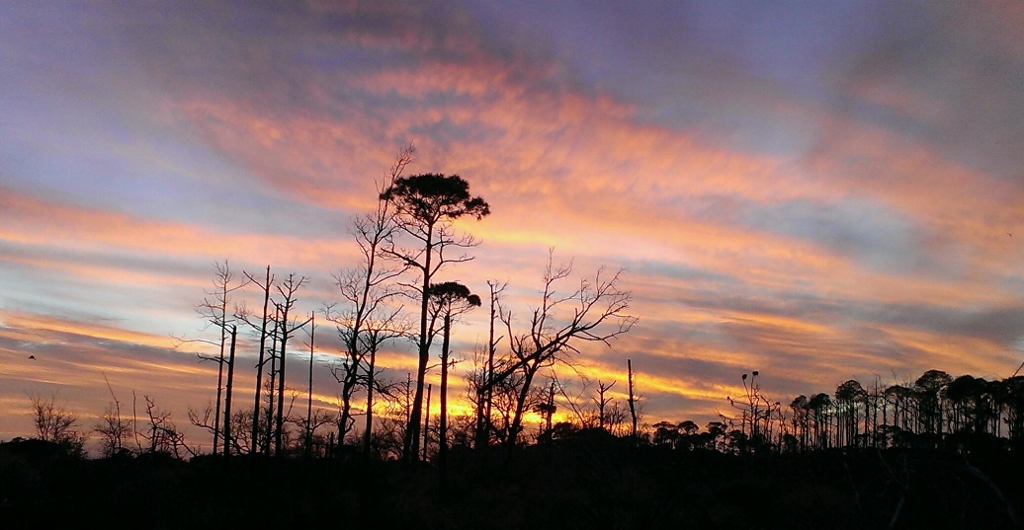 Truth be told, Hank and Rufus lobbied hard and picked this island, not Robin and me. While I am not about to subject my dogs to the psychological abuse of having an owner that writes blogs as the pet, I can honestly say that we probably would not have picked this location if not for their enthusiastic input. Although they primarily communicate their preference via Robin’s subconscious, their opinion is real, and satisfying their needs (sometimes above our own) is really no different than if we had kids. Trust me when I say, if they are not happy, we are not happy. 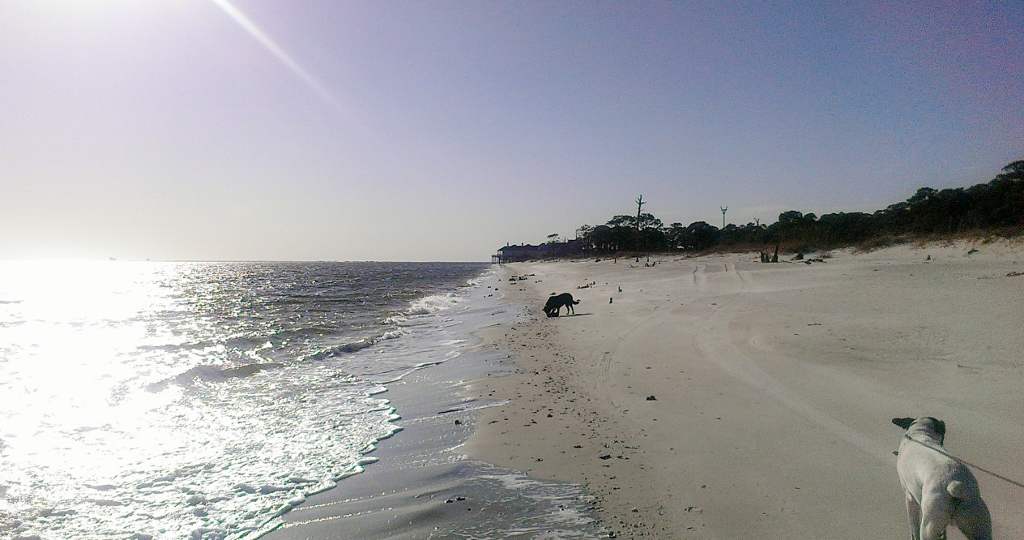 In fact, some of the most fun and social locations for us, Charlotte, Cedar Key and Grayton Beach were not particularly great for the boys. The town of Cedar Key was very dog friendly but the hiking access that we had directly from the RV park was not ideal and nor was the amount of time we spent “out” and them “in”.

Although we knew that there might not be much night life for us humans, we compromised and chose the next place, Three Rivers State Park, primarily for the dogs. We then alternated back to the humans playground of Grayton Beach. As we mentioned in our previous blog, this was one of the most pristine beaches we have ever been but unfortunately, no dogs allowed.

As we walked every day toward the dog allowed dunes area at Grayton Beach, Hank would always take the right-hand turn toward the beach access trail and by the large NO DOGS ALLOWED sign. He would look back at us over his shoulder and the fully extended retractable leash as we explained that the state of Florida does not allow dogs on the beach even when it is in the middle of winter and even when no one else is around. Although he knew exactly what we were saying he completed rejected the law based on premise and he usually hiked is leg as he walked back away from the beach and past that sign. We then lead him to the “dog friendly” hiking area where we would spend half of our walk pulling sand spur thorns out of his paws.

After eleven days at Grayton, the dogs had been patient but we were going somewhere primarily for them and not for us. Dauphin Island met their needs nicely. The large beach was private to the campground and off leash friendly. We rarely saw other people as the weather was a bit cool for most. There was plenty of dead jellyfish to lick as well as dog poops and pees to smell and do everywhere! 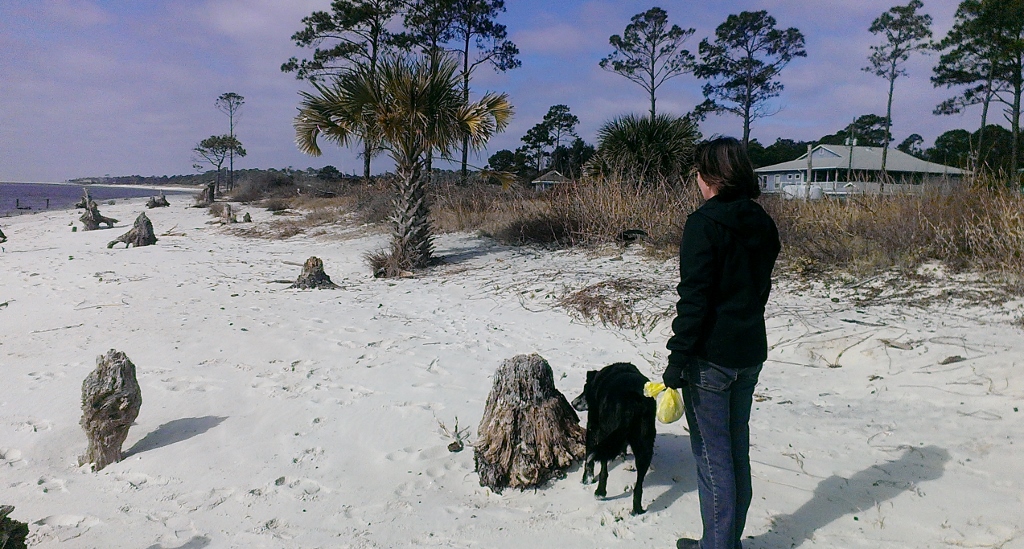 There was also a network of swamp trails and a bird sanctuary that was absolutely perfect for dogs. Our RV site also had a pretty nice “yard” for lounging and napping. Overall we had a blast, probably similar to how parents say they enjoy places like Disney World. You can say all you want that it is fun for adults too, but lets face it, if you didn’t have kids you wouldn’t go within a 50 miles of that place. That is about how I would describe Dauphin Island for us during this week long winter visit. 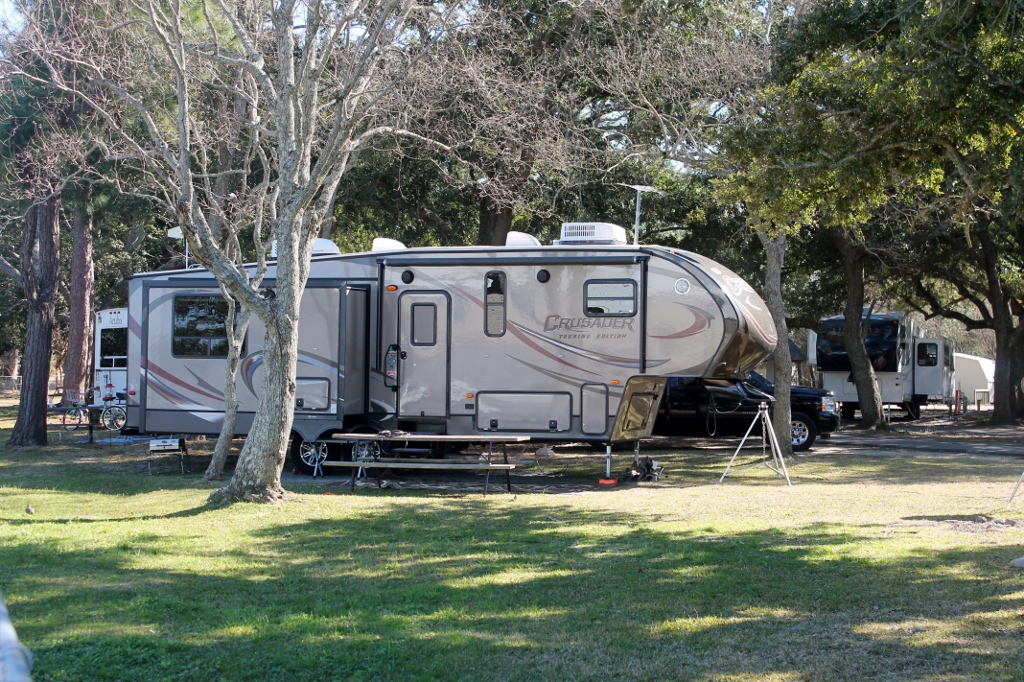 One of our favorite activities in a new town is to seek out the local bars and restaurants. During our week at Dauphin Island we ate out four times. Although I won’t go into great detail about each location, what I can say is that the Chevron and Grill was probably the best meal we had out and the name is exactly what you think it is. That should tell you quite a bit about the Dauphin Island restaurant scene overall.  JT’s Sunset Grill was OK but like I said, probably not better than the gas station food around the corner with a similar menu. There was really nothing wrong with our lunch at Barnacle Bills and I think that is a complete and fair review of the place. Islander’s Restaurant and Bar was a somewhat nicer beach side atmosphere and bar but with horrendous food. The calamari appetizer we ordered may go down as one of the worst dishes I have ever been served at a restaurant. Maybe at some point we will start posting actual Yelp Reviews but right now keeping up with this blog is all I have. Sorry Dauphin Island, Alabama, I don’t mean to be so critical, but from what we saw, restaurants are not your thing.

We also went to check out the bar scene at The Pelican Pub but it was also not our speed and one drink was more than enough. The bar was on the water and it looked nice enough but before we had completed our order we were ready for the check. No music whatsoever and all bar TV’s were locked on Fox News with the volume up loud. Most of the women had voices deeper than mine and the tipsy locals propped up on bar stools started most conversation with the always disputable Alabama, drawl proclamation “I am not a racist but….”. The outdated bar and décor matched the opinions being openly expressed and this was no place for a couple of Colorado hippies seeking micro brews.  I always wondered why some people think that only degenerates drink at bars. I guess that is because in some places it is true and we often forget that Colorado is not representative of the entire country. We decided to do our eating and drinking at the trailer for the rest of the week and once again that decisions was quite satisfying to the dogs and our stomachs. 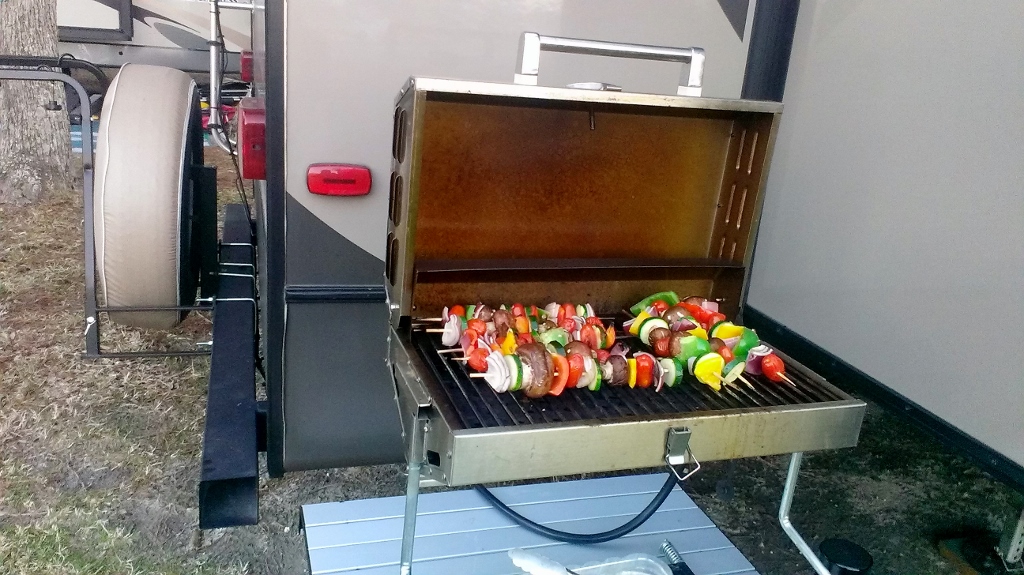 Although my overall opinion of the island and people is not particularly high, there was plenty of nature to see and we visited the local Sea Lab Estuarium and Fort Gaines historic site; both were enjoyable but nothing to blog home about. 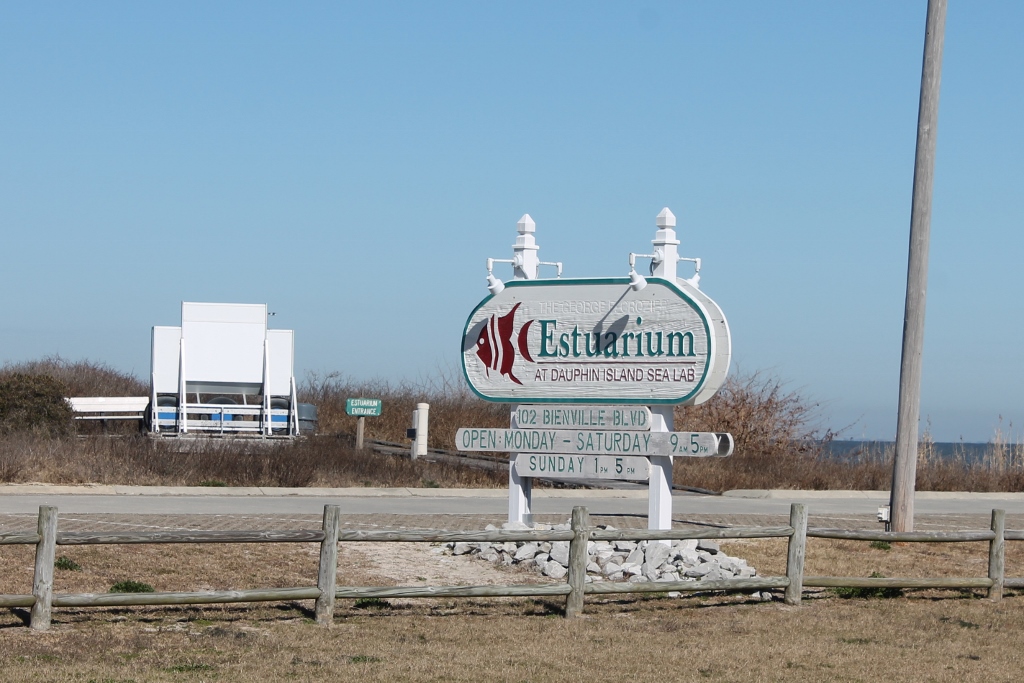 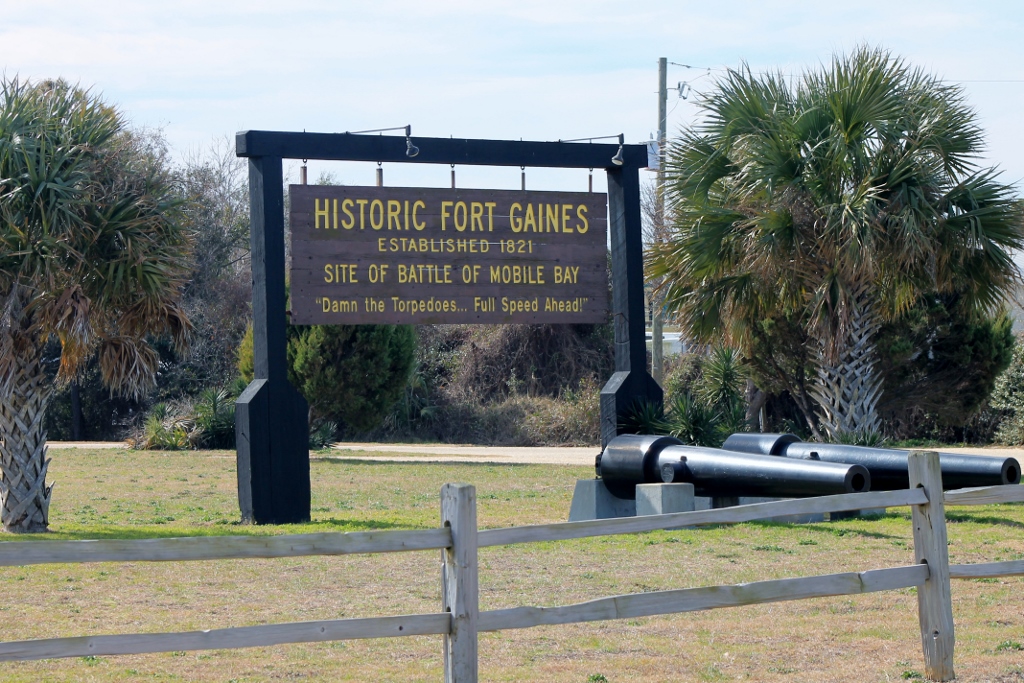 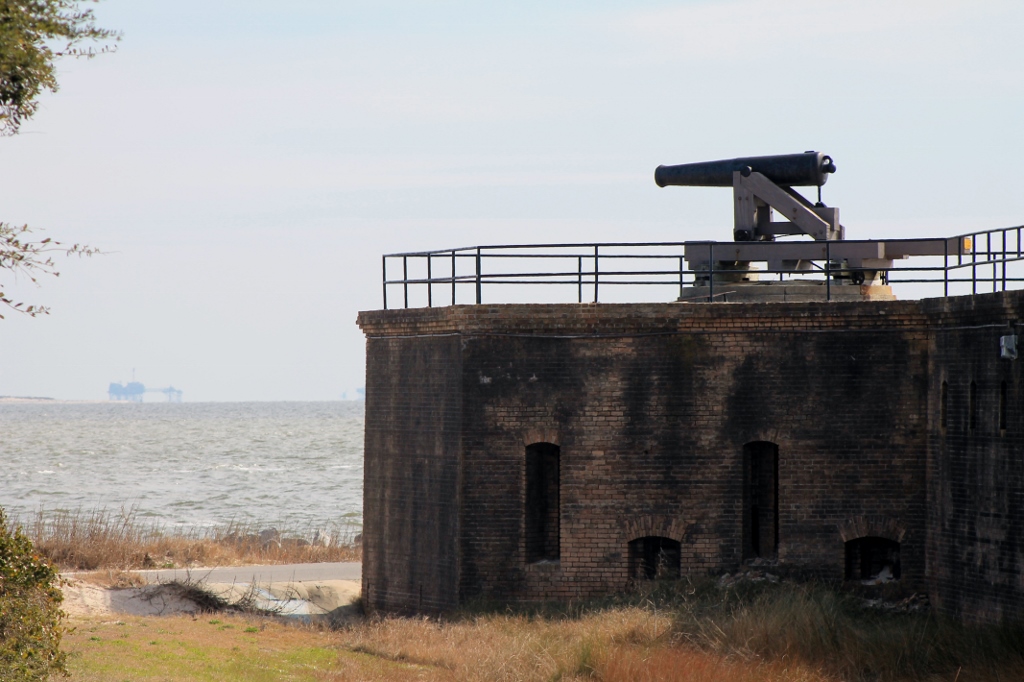 There was also a Mobile Bay Ferry that transported cars on and off the island to a port that was right beside the campground. We did not ride on this ferry as it was closed to RV’s when we had planned to cross upon arrival. The port was fairly busy transporting cars as well as ships traveling back and forth to the oil rigs. Robin and I did have regular competitions to see if we could correctly name the boat that was going by based on the engine sound filling our trailer. The engine sound of Mr. Ethan became easily discernible after a few days. 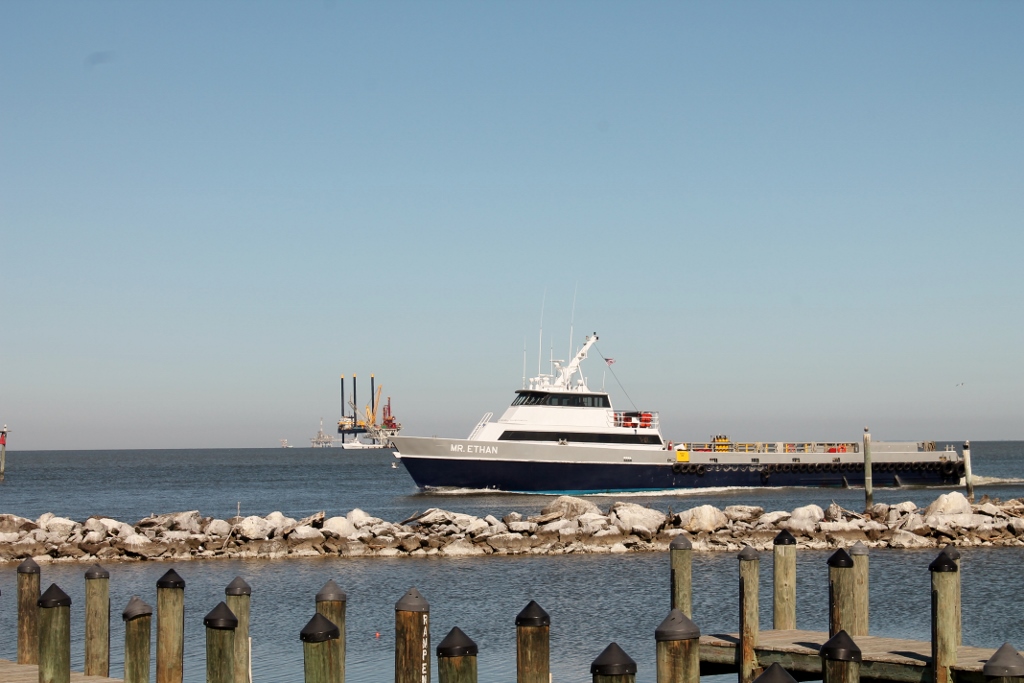 These were all interesting considering where we were and considering what little else there was to do, but overall, I would not recommend making a trip based on any of these attractions. In all fairness this is a pretty place and I’ll bet it’s a different situation in the summer when the water is warm and the dolphins are out to be seen.  I hope the tone of this blog was not too harsh. We are beyond lucky to live this island life and we appreciate these magnificent places even when the attached towns leave something to be desired. 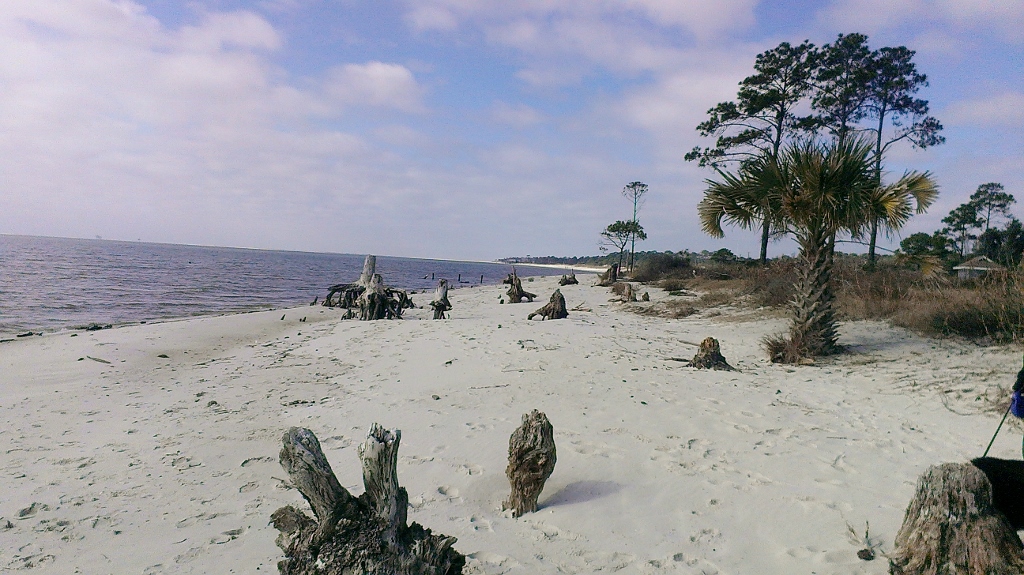 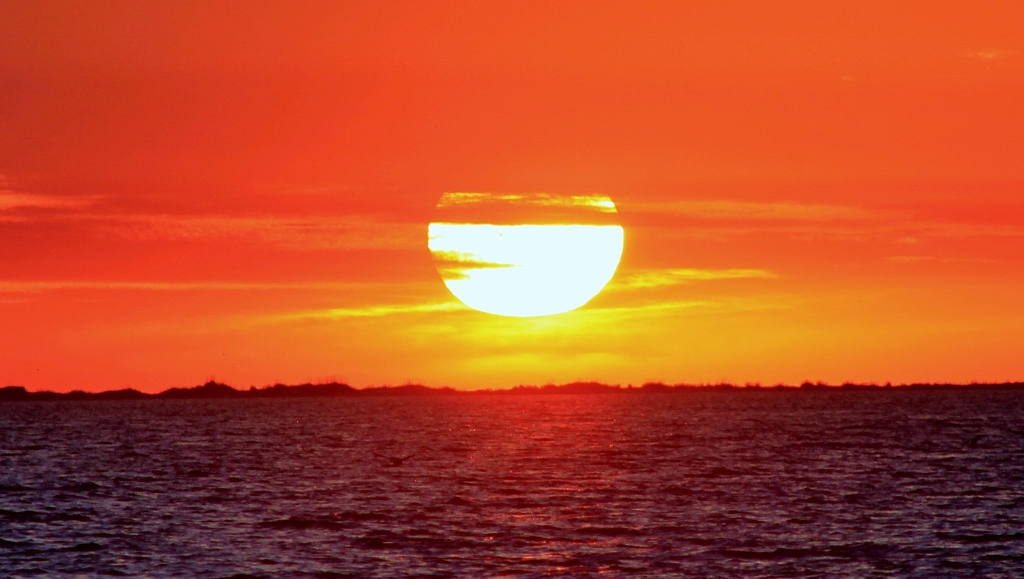 So in summary, when traveling as a family sometimes compromise has to be made and the needs of all family members have to be considered. Even when a location is not exactly paradise for a golf obsessed snowbirder in his thirties, I can be just as happy watching my tennis ball obsessed eleven year old dog do his thing and have the time of his life on an island made for a dog. 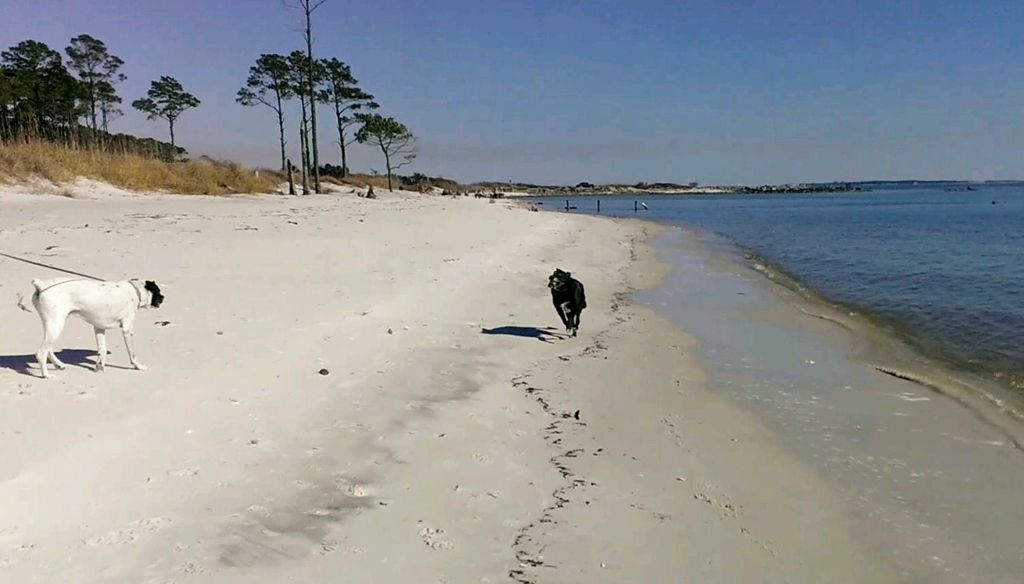